Mapping wood heating and wood smoke in the United States

Updated, Dec., 2020: Wood heating has made a comeback in the United States and has been the fastest growing heating fuel for most years between 2005 and 2015, according to US Census figures. Currently, 2.36 million homes in the United States use wood as a primary heating fuel (ACS, 2015, 1-year estimates). And 8.8 U.S. million homes use it as a secondary heating fuel (EIA, RECS, 2009). Wood was the dominant residential heating fuel in the United states until coal began to take over in the 1880s. After that, heating oil and then gas became popular. The percent of the population primarily heating with wood dropped from 23% in the 1940s, when the US Census first began tracking heat, to a low point of 1.3% in 1970, when fossil fuels were cheap and popular. 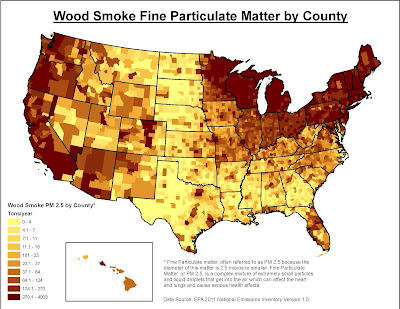 This second map also shows PM 2.5 emissions from residential wood combustion by county, but its on a per capita basis according to the 2008 National Emissions Inventory, in this  EPA report, "New Methodology for Estimating Emissions from Residential Wood Combustion." It appears to show the densest per capita concentrations of PM2.5 in Wisconsin and Minnesota where the most outdoor wood boilers are made and installed. 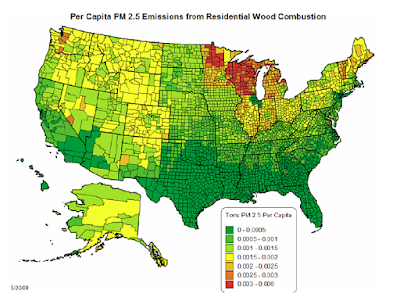 The third map, from the same 2008 EPA, report provides further detail on the source of PM 2.5 emissions by appliance type. Each appliance type is represented by a different color. Red represents fireplaces, green represents fireplaces with inserts, dark blue represents woodstoves, light blue represents indoor furnaces, magenta represents outdoor hydronic heaters, and yellow represents wax/sawdust firelogs. While the terminology is somewhat confusing, the map shows some interesting trends.  For instance, wood stoves emit the majority of PM in the Northeast, while outdoor hydronic heaters are the largest source in the Great Lake states (outdoor wood boilers continued their popularity in these states after the 2008 EPA report). Fireplaces with inserts are the largest emitter in most of the south and California. Indoor furnaces are the most common source of PM pollution in Ohio, Indiana, and Illinois. 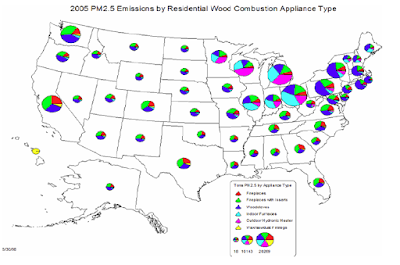 The next map was produced by the Census Bureau, showing per capita use of wood stoves. It shows 17.8% of homes in Vermont use wood or pellets as a primary heat source in 2012. Maine had the second highest percentage at 13.7% of homes. Out West, Montana has the highest percentage with 9.2% of homes, followed by Idaho at 7.9% and Oregon at 7.1%. On the US mainland, the states with the least wood heating are predictably Florida, at 0.2% of the population and then Texas at 0.4%. 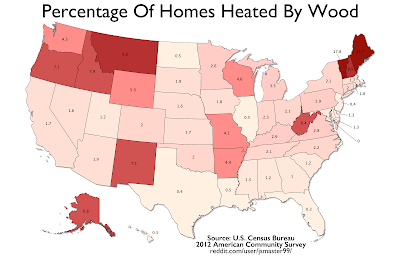 The Alliance for Green Heat produced a map using Census data to show the continued growth of wood heating between 2000 and 2012. By 2010, the growth trend was well established, due in part to the housing crisis and recession. In that period, wood heat doubled in about 10 states, mostly in the Northeast. 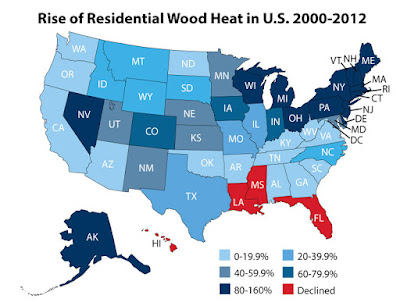 This map below, made the Alliance for Green Heat, also uses Census data but breaks down primary wood heating households by Congressional districts. This provides a much more detailed look at the geography of wood heating compared to state level details. Presumably, a map showing wood usage at the county level could also be produced. 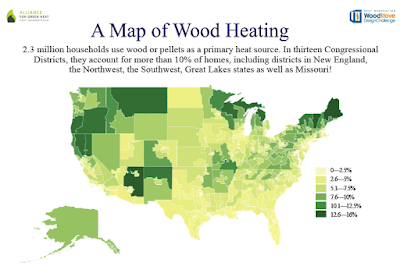 This last map shows a curious phenomenon in 1950 where the Census Bureau found higher rates of primary wood heating in southern states than in many northern ones. This is likely due to the quicker penetration of fossil fuels in northern states, whereas room heaters in southern states, including those in many poor, rural black and white households, continued to operate on cordwood. 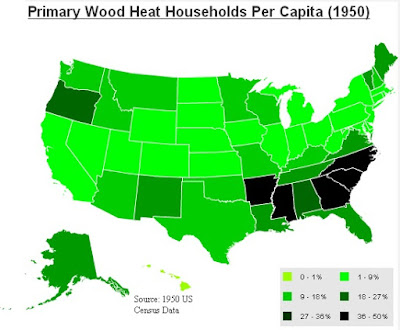 This map shows a per capita use of primary wood heat in impoverished counties.  Note the hot spots in northern Maine, West Virginia, Arkansas and the Navajo reservation in New Mexico.  We are unclear if Native American populations are among the hot spots in Washington, Oregon, and Northern California. 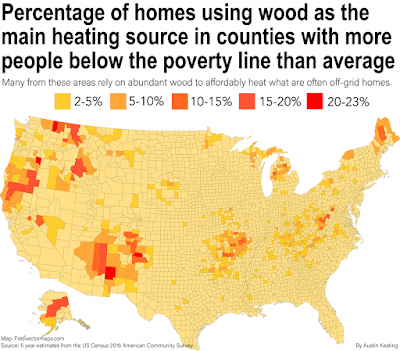 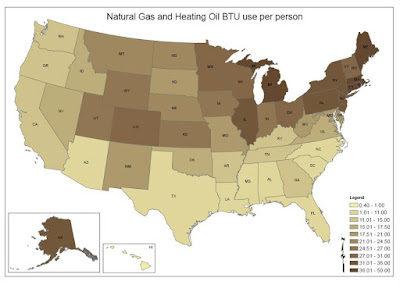