An analysis of U.S. Census data by the Alliance for Green Heat shows that wood heating is expanding in some states and shrinking in others between 2009 and 2019.  Generally, it is expanding in northern New England and shrinking in the Pacific Northwest. In areas that experience frequent weather inversions causing excessive smoke build up, like Oregon and Washington, fewer homes heating with wood is good news for local air quality. In New England states where it is expanding, it's good news for agencies and groups that want to more aggressively reduce fossil fuel heating, and invest heating dollars in the local economy.

Overall, the number of homes that use wood or pellets as their primary heat source dropped from 2% to 1.6%, with low fossil heating fuel prices likely being the top factor.  From 2000 until about 2012, wood and pellets were the fastest growing heating fuel in the United States. According to the U.S. Energy Information Agency, 8 states experienced more than 100% growth and 7 states experience between 50 and 100% growth from 2005 to 2012.

Vermont and Maine have long been ranked #1 and #2 for per capita primary wood heating with 9% and 13% of homes as of 2019.  New Mexico rose from #6 in 2009 to #3 in 2019, passing Montana, Idaho and Oregon.  It experienced a 14% rise in primary heating during that decade whereas Montana, Idaho and Oregon dropped 14%, 10% and 17% respectively.  Poor economic conditions in Native American Reservations may account for some of New Mexico’s per capita rise. 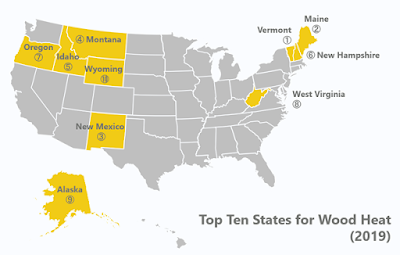 Wood and pellet heating is widespread and culturally accepted – it is used in about 10 million homes – and consistently offsets a significant amount of fossil heating fuel every year. Now, the electrification movement is leading to more and more homes heating with heat pumps. In the coming decades, until renewable electricity is more available, wood and pellet heat can help utilities by lowering wintertime peak demand.

Census data on the rise or fall of per capita primary wood and pellet heating only tells parts of the story. Stoves are used far more often as secondary heaters and can be a secondary heater one year and a primary one the next, depending on fossil fuel prices or a household’s ability to pay for fossil fuels. It also doesn’t necessarily reflect the sale of stoves, or how many people buy new stoves to replace old ones, buy stoves for secondary homes, or switch from wood to pellet stoves, for example. According to the Energy Information Administration (EIA), about 3 times more homes use wood as a secondary fuel than a primary one.

It is still unclear how climate change and slowly warming winters will impact wood heat. The federal government and states may increase rebates for the cleanest and most efficient units, since wood and pellet stoves are a very cost-effective way to reduce fossil heating fuels. Additionally, stoves that used to be secondary heaters may now become primary heaters as more and more households need to use their furnace or boiler less.  Other factors that are expected to lead to more stove sales include the increasing severity of major storms and blackouts and the widespread switch to electric heat pumps.  Many households with heat pumps want back-up heat, cheaper heat during the coldest months, and a more intensive heat source.

Northern New England states have already started to incentivize more pellet heating to invest in local energy jobs, reduce reliance on carbon-intensive oil and propane heat and help build the infrastructure for modern pellet heating systems. Those states do not have the level of wood smoke problems that some western U.S. areas have.

The list of the per capita top 10 wood heating states has also seen some reshuffling over the past decade. The popularity of wood relative to other home heating fuels increased in some states and declined in others.

In the past ten years, New Mexico overtook Montana, Idaho, and Oregon to become the state with the 3rd highest percentage of homes heating with wood. Wood’s popularity has declined in West Virginia, Wyoming, and Washington, while increasing in Alaska, Vermont, New Hampshire and Maine.

The home heating question has been a Census question since 1996, and the question and definitions have not changed since then. As a result, pellets are not specifically mentioned, though the Census definition says: “This category includes purchased wood, wood cut by household members on their property or elsewhere, driftwood, sawmill or construction scraps, or the like.” Therefore, we assume that people answering this question today will say they use wood if they use pellets.

Regarding older Census data, it is difficult to find historical annual state-level data that are 10 years or older. Data from 1999 is available for download online but in aggregate form with unlabeled questions. The 2020 Census data will be released starting in September, though some of the data will not be released until January of next year. The data used to compare household wood heating 2009 and 2019 is from the American Community Survey (ACS), which the Census Bureau conducts every year. One-year ACS wood heating estimates are less accurate because the respondents are fewer than the official decennial “Census,” which only happens once every 10 years.

EIA: 2014 Increase in wood heating most notable in the Northeast

2010 Census Shows Wood is Fastest Growing Heating Fuel in US

Posted by Caroline Solomon at 8:46 AM No comments: