How to inspect a wood stove: A visual guide for safety & performance

The Alliance for Green Heat developed a visual guide for inspecting wood stoves for the energy audit and weatherization community as those communities have lacked appropriate training in how to inspect stoves.  Safety inspections of wood stoves are supposed to be required for all stoves, whether they are primary or just occasional heaters for DOE funded programs, such as for low-income homes covered by WAP – the Weatherization Assistance Program.

This easy-to-use guide provides photos of the most common safety issues found in wood stoves that should be checked by energy auditors - as well as other energy and hearth professionals.  It can also be useful for homeowners.  Coming soon is a checklist that will indicate the status of each item and whether it needs repair.  The guide is broken down into what needs to be checked on the exterior of the stove, the interior of the stove, the exterior of the house - and many special circumstances.  Some items are in grey areas of what an energy auditor is responsible for checking - such as the storage and moisture of the firewood - and we encourage states and counties with high rates of wood stove installations to engage in a more expansive audit.

The problem is that there is little evidence to indicate that stoves are being inspected in a meaningful and consistent way within many WAP programs.  Most states use forms that provide many options to add detail about the inspection of a furnace, but little or none for wood stoves.  Some states list wood stoves as a heating appliance and a few states, like Idaho, ask if the stove is “operable, failing or inoperable.”  Furnaces on the other hand are turned on and have their flue gases tested, producing a written record on CO, PM, temperature efficiency and draft.  This provides useful, objective indicators of the health of the furnace or boiler.  There is no corollary data input options for wood stoves that would provide a written record showing the stove had received a meaningful or even minimal inspection.

In recent weeks, AGH did PowerPoint presentations to two important stakeholder groups: the DOE WAP Training Consortium and the National Residential Wood Smoke Workgroup.  Both of

these presentations were very productive and led to substantive follow-up work with many of the attendees.  Kelly Cutchin who heads up the WAP Training Consortium has been particularly helpful as AGH navigates the bureaucracy that surrounds WAP standards, update, trainings, etc.

But while this project has gained a lot of traction and improvements are happening, we are still far away from our goal: changing the standards that the DOE uses to approve state work specification documents that have minimal attention to wood stoves.  Most states are not living up to DOE requirements that all heating systems be inspected and repaired, as needed, or possibly replaced. One problem is that DOE regulations provide far more specificity about fossil fuel furnaces and boilers. For example, “WPN 19-4 Revised Energy Audit Attachments”, a key guidance document for the Weatherization Program, mentions boilers 19 times, furnaces 21 times, and wood stoves only 1 time. The result permeates the inspections and attention that each heater receives throughout the value chain. Thus, in the sections about repairing heating equipment, there is no guidance about how to repair a stove, while there is a long list of things relevant to boilers and furnaces. This continues year after year, despite the fact that there are more wood stoves than residential boilers in the United States (around 9 million homes are heated with oil, gas and propane boilers, while 10.1 million wood stoves provide primary or secondary heat nationwide).

There are plausible explanations for why WAP materials often have far more detail about inspecting and repairing furnaces compared to wood stoves.  First, wood stoves are more often than not, a secondary heater, where furnaces are almost always primary heaters. Second, wood stoves are very infrequent in urban areas and in southern states.  And third, there could be an implicit bias against wood stoves by agency officials who view them as a relic of the past and underestimate their numbers, safety issues and their importance for the rural poor.

The integration of wood heaters more fully in the WAP program ultimately should include changes to state “Standard Work Specifications” (SWS) documents, which are updated every 5 years to assure they reflect industry-accepted practices. Significant updates in the area of combustion safety occurred in the last 5 years but it is unclear if wood stoves were included in any significant way.

Sometimes, WAP documents say little more than a stove should be replaced if it shows “structural failure.” Some states seem to interpret that as having a crack in the heat exchanger, which in the case of a wood stove means a crack in the body of the stove. Maine is more restrictive and says replacement is "allowed only when there is a crack in the heat exchanger than may cause a carbon monoxide problem or a fire danger."  Montana is unique and at the opposite extreme where non-EPA certified stoves are considered de facto "unsafe for program purposes."

Changes in these DOE funded programs will also influence the way that states, utilities and private companies conduct energy audits.  When AGH polled its supporters who have had energy audits recently, a majority said their wood or pellet stove was completely ignored.  Considering so many wood stoves are self-installed, this oversight is ripe for change.

Many thanks to everyone who has been working with AGH on his project, and special thanks to the CSIA, EPA and the WAP Trainers Consortium.

Posted by John Ackerly at 8:22 AM No comments: 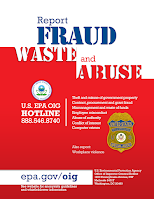 On October 22, 2021, the EPA’s Office of the Inspector General announced it was launching an investigation into the EPA’s residential wood heater testing and certification program. The memo announcing the investigation was directed at both the Office of Enforcement and Compliance (OECA) based in DC and the Office of Air and Radiation (OAR) whose staff is mainly based in Triangle Park, North Carolina. The report is scheduled to be published sometime next year.

The Office of the Inspector General is “an independent office within the EPA that helps the agency protect the environment in a more efficient and cost-effective manner.” It identifies areas it believes need investigation and issues a public report with recommendations. While it does not have enforcement power, the EPA is expected to take the Office's recommendations seriously. There can be disagreements over priorities and that is already happening in the water program and elsewhere. The OIG also submits semiannual reports to Congress. In the event that the EPA ignores any of the recommendations made by OIG, it is possible that the agency can be pressured to address them through hearings, appropriations riders or funding. The EPA OIG can also uncover criminal behavior, which would be addressed accordingly by the U.S. Attorney's Office.

More specifically, the memo announcing this evaluation says, “Our objective is to determine whether EPA effectively uses its oversight and enforcement authority to ensure that all residential wood heaters reaching consumers are properly tested and certified in accordance with established standards. … We may also choose to include a sample of regions in our evaluation and to conduct work at laboratories and third-party certifiers in selected regions.”

Before publicly announcing this evaluation, the OIG contacted the Alliance for Green Heat on Oct. 13, 2021 and held a conference call with AGH on Oct. 21. For years, AGH has been raising alarm bells about the lack of EPA enforcement in a number of areas, including the numerous companies that continue to manufacturer and sell outdoor wood boilers. AGH has often contacted the EPA Office of Enforcement and published stories on our newsletter on companies who make and/or distribute uncertified residential central wood heaters, including ACME (Missouri), EZBoiler (Michigan), Hyprotherm (Arkansas) and MBTEK (Pennsylvania distributor of Polish appliances). AGH has spoken with most of the companies by phone and they say that they have never been contacted by the EPA or a state agency about certification issues.

AGH also raised EPA’s failure to contact the whistleblower regarding the credible allegations of fraud at US Stove Company, along with a number of other areas where enforcement action was needed. 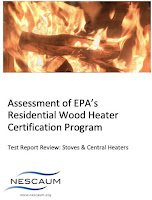 The OIG’s evaluation is also believed to have been triggered by the NESCAUM report, Assessment of EPA’s Residential Wood Heater Certification Program, that found a “systemic failure of the entire certification process, including EPA’s oversight and enforcement of its requirements.” That report led the EPA to conduct its own review of the certification paperwork for all certified stoves. The EPA is contacting scores of companies to obtain missing information or for clarification. In some cases, it is requiring the company to have the stove tested again.

If you have evidence of misconduct or mismanagement regarding the EPA’s oversight of wood heater testing or certification, you can provide information using this form, and refer to case OSRE-FY22-0026.
Further reading:

Posted by John Ackerly at 8:59 AM No comments: