Trends in pellet heating in Europe in 2021

This pellet statistical report is produced by Bioenergy Europe, a “non-profit, Brussels-based international organisation bringing together 41 associations and 122 companies, as well as academia and research institutes from across Europe.”  We find it extremely valuable and timely, in part because it shows the extensive use of domestic and imported pellets for residential and institutional heating.

News coverage in North America almost exclusively focuses on the industrial pellets exported for electric generation, primarily in UK.  This report shows a much broader and more diverse pellet market that also relies on premium heating pellets, which are made by plants using far more residuals than the plants operated by companies such as Enviva which are now relying extensively on whole logs.

AGH calls on the scientific community, environmental groups, policy makers and the media to look at the end use of pellets, and the highly variable carbon impact of using pellets at 80% efficiency, compared to 35% efficiency.

Bioenergy Europe released parts of their report to the general public, which can be downloaded here where many of the sections are blurred. We only excerpted portions of this report below that deal with pellets used for heating.

The sales of residential pellets heating appliances showed very encouraging trends in countries like Germany, France and Austria, proving that, when the governments actively invest in phasing out fossil fuels, pellet systems directly appear as a credible, affordable and sustainable solution. In 2021 we have been recording even more encouraging sales in those countries.

First, the 2020- 2021 heating season lasted much longer than usual, which, together with homeworking requirements in many countries, led to an increased pellet use in the residential market. Secondly, this long heating season, coupled with high electricity prices, encouraged many industrial operators to use more pellets than usual. … it is incredibly impressive to see how pellet prices compare to fossil fuel prices, which are currently hitting historical record highs. Together with increasing appliance sales, this shows again how bioenergy can help to fight energy poverty in Europe.

In North America, the use of pellet has not witnessed a dramatic growth in the recent years despite different initiatives to grow the market both in US and Canada. Still, a niche market is consolidating its expansion: the pellet barbecues. The increasing sales of these barbecues lead to increasing sales of high margin pellets (e.g. 3 producers of 10.000 tonnes in Canada).

In South America, the use of pellet, mostly for residential and mid-scale heat production, is expected to grow in the future 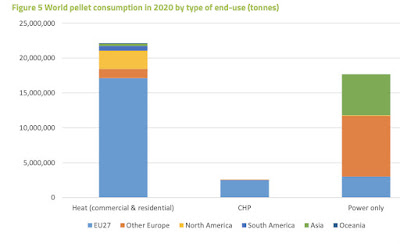 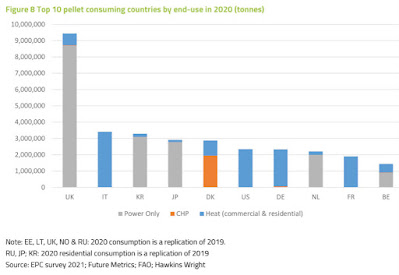 The annual increase of the pellet demand in the residential/commercial sector was smaller in 2020 than in 2019: +3,8% in 2020 (vs 2019) and +5% in 2019 (vs 2018). It can be explained by the fact that 2018 has benefited from fairly good heating seasons while 2019 was deeply impacted by the low 2019-2020 heating season and a low start of 2020-2021 heating season. Furthermore, the not so strong increase in sales of heating appliances did not compensate for this low demand. Despite this, France and Serbia are highlighted as growing examples, as they have both registered the biggest increase (in absolute terms) in residential/commercial pellet consumption. 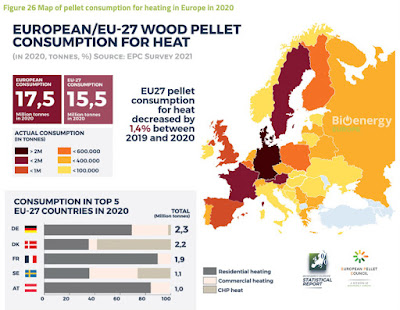 Heating degree days (HDD) is used as a proxy to estimate the heating energy needs - the higher the HDD for a season, the higher the need for heating. Therefore, we can see that the heating season of 2012-2013 was generally characterised by colder temperatures (i.e. higher HDD), creating some disruption on the pellet market that was not fully prepared, leading to market tensions and even small shortages. For this reason, pellet market players then tried to organise themselves to prevent this situation from repeating itself by increasing their production and stock. Unfortunately, from 2013 to 2016, Europe experienced three consecutive mild winters, leading to a rather disappointing growth of pellet consumption in the heat market inducing the accumulation of pellet stock in some regions. Thankfully, the following heating seasons were colder, resulting in better pellet use for heat showing a growth of around 12% over the 2016- 2017 period.

This sudden rise in consumption generated again some tensions in the supply leading to shortage in some areas and generating a price increase in 2018. The heating season of 2018-2019 was slightly milder than the previous ones but only marginally colder than the ones from 2013 to 2016, leading to a modest growth of the pellet consumption for heating. The 2019-2020 season followed the same pattern as the previous season and a reduction in consumption also appeared. The 2020-2021 season started very similarly to the previous but then lasted for much longer. Indeed, in many areas, the energy demand was still rather high in March and April, which unexpectedly supported the pellet demand, allowing most of the market players to empty their stock. 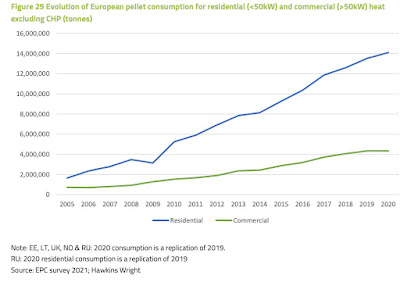 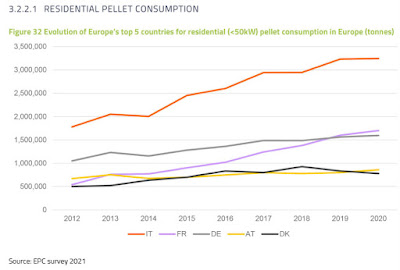 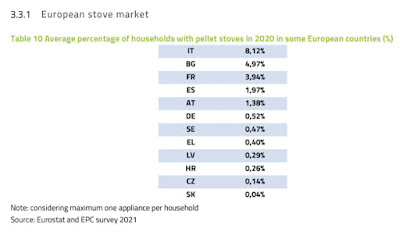 [The full report contains a para on each country, but the following 3 countries were the only ones included in the public facing report. - Ed]

Portugal: The installation of pellet boilers and stoves reached a peak in the winter of 2019-2020. The producers consider that, in the upcoming years, the number of installations will be steady with tendency to decrease in 2025 due to the competition with heat pumps.

Serbia: A huge increase of pellet stoves and boilers is the result of a huge number of schools (over 200), kindergartens, health care centres and other public and commercial buildings that have switched from coal and heating to pellets. Since 2019, the government of Serbia has supported a vast number of public buildings in replacing heating oil and coal with wood pellets leading to sales increase.

Spain: The market trends in 2020 were worse than in 2019 with a 16% decrease in the annual sales of pellets stoves. During the pandemic, the installations of stoves have been impacted due to the limited availability of installers, while sales greatly recovered in the second part of the year. 2021 should be rather similar while 2022 and beyond should be more favorable as Renewable Energies supports, and recovery funds will be put into place. 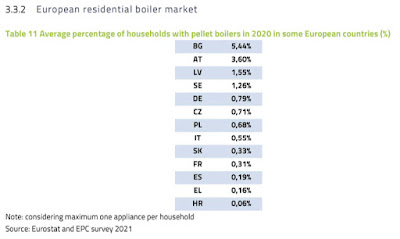 After ten years, almost all stove and boiler manufacturers appear to be accurately informing their consumers about which models are eligible for the tax credit for wood heaters that are at least 75% efficient.  Some outlets, such as We Love Fire, a network of 280 hearth retailers, go out of their way to educate customers on how to ensure the stove they are buying qualifies for the credit and urges them to check the EPA’s database.

There was widespread exaggeration and misleading advertising about stove efficiencies in the preceding decade, and the EPA did not require wood and pellet stove manufacturers to disclose the efficiency of their models, or even to test for it until 2015.

Consumers are often advised to download the manufacturer certificate and keep it in their files, along with the receipt for the stove, as proof that they properly took the credit.  However, the IRS does not require manufacturer certificates, and a screenshot of the EPA database, showing an efficiency of at least 75% for your model is even better documentation.

When Congress passed the new, higher tax credit legislation in 2020, they specified that the minimum 75% efficiency level must be measured using the higher heating value (HHV), eliminating previous ambiguity. However, Congress did not specifically refer to the EPA’s database, which lists the HHV efficiency of all stoves, boilers and furnaces.  Almost all of industry accepts the EPA database should be used to confirm efficiencies and encourages consumers to check it.  The Hearth, Patio & Barbecue Association (HPBA), the industry’s largest association, broke from its past practice and took a strong position that consumers should rely on the EPA database to determine efficiency.

AGH reviewed scores of certificates issued by stove and boiler manufacturers by brands such as Hearthstone, Jotul, Lopi, Quadrafire and many others and found for the first time that they all were providing their consumers accurate information.  We found only one stove manufacturer, US Stove Company, still willing to list stoves as qualifying for the tax credit that are under 75% efficient.  US Stove issued a certificate saying that four of its pellet stove models qualified for the credit despite test reports from third party EPA-approved labs showing the models have efficiencies of 64%, 66% and 69% (which is also how they are listed on the EPA database).  The average pellet stove is about 73% efficient. Their test reports are provided on the US Stove website.

John Voorhees, Vice President for Compliance at US Stove, signed the tax credit certificate that states

“Under penalties of perjury, I declare that I have examined this certification statement, and to the best of my knowledge and belief, the facts are true, correct, and complete.”  AGH reached out to Mr. Voorhees for clarification and to ensure the US Stove position was included in this blog, and though we exchanged many emails and US Stove provided relevant information, the company declined to permit AGH to quote from that exchange.  AGH will update this blog if US Stove chooses to provide any information that we can make public.

It is unclear why US Stove singled out the four models on this certificate when other models are listed with higher efficiencies, though none are above 75% except for one pellet stove made by their Breckwell brand.  When the tax credit was first passed by Congress in 2009, most companies declared that all of their models qualified.  That year, US Stove issued a certificate saying that 24 models were eligible for the credit requiring a minimum of 75% efficiency.

Today, most boiler and furnace companies also seem to be following Congress’s plain language and only certifying units at 75% or more.  Boiler efficiencies are more complex because there are several test methods and the resulting efficiencies aren’t as comparable as they are with wood and pellet stoves. AGH found one indoor wood furnace manufacturer, Hy-C who makes the Shelter furnace, tested at 70% efficiency by the lab but the company issues a Certificate of Qualification that it meets the 75% HHV threshold.

Tax credits for consumer appliances have a variety of purposes, in addition to incentivizing consumers to buy higher efficiency appliances.  They are designed to influence manufacturers to improve product efficiency, accelerate market penetration of more efficient products and potentially prepare the market for future mandatory requirements.  Currently, there is no required minimum efficiency for wood and pellet heaters.  For pellet stoves like the ones in question, they range from 58% efficient for a model produced by US Stove, to an 87% efficiency unit from Cleveland Iron works.

Wood and pellet stoves and boilers are an excellent way to reduce fossil fuels and affordably heat your home, especially in seasons like this one when fossil fuel prices are high.  Federal tax credits are an efficient way to help households reduce fossil fuel use with a renewable, low carbon fuel.  However, unless consumers use seasoned wood of under 20% moisture content, wood stoves can produce excessive smoke and will not reflect the efficiency achieved in the test lab.  AGH considers pellet stoves to be the optimum choice, as their combination of high efficiencies and very low particulate matter make them suitable for both rural and more densely inhabited towns and suburban areas.  Unlike wood stoves, the efficiency numbers achieved in the lab can generally be achieved by consumers if the unit is maintained properly.

Even though most manufacturers are now issuing tax credit certificates for stoves that are at least 75% efficient, AGH urges consumers to also check the EPA’s database of wood heaters to be sure.  AGH has been in touch with IRS officials, urging them to issue guidance that wood heaters must be listed at 75% efficient or higher on the EPA database to close any remaining loopholes that a few manufacturers still try to use.

AGH urges the IRS to recognize efficiencies in the EPA database, Feb. 2021

A review of wood and pellet stove efficiency ratings, Jan. 2014, updated May 2020

Posted by John Ackerly at 11:46 AM No comments: