The simplicity of the non-catalytic stove makes it the most popular type of stove in North America by far.  With most non-cats, the consumer only needs to worry about a single lever to regulate the amount of air in the firebox.  But some consumers unwittingly buy a very unique kind of non-cat, a  downdraft stove, and often regret it.

June 2021 update: The number of new downdraft models are dwindling but they still appear on the second hard market.  We are not aware of any on the market now.  Please let us know if you know of one. AGH has applied for DOE funding to design and build a new type of fan-assisted downdrafted stove that would overcome the issues of older, manual designs.) 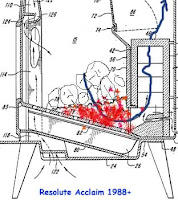 There used to be a handful of downdraft stoves on the market but were gradually been pushed aside by non-cat stoves with air tubes that reburn smoke as it exits the firebox.  The downdraft stove works with a second lever that engages a by-pass damper which forces the smoke down into a chamber where heat can reburn it before it goes back up the chimney.

Almost all stoves on the market today do not try to get smoke to go down, but rather try to reburn it on its journey upward with secondary air introduced through holes in tubes or in upper wall of stove – or with a catalyst. Hybrids use both tubes to inject for secondary air and a catalyst.  (Click here for more on cat, non-cat and hybrid stoves.)

Downdraft stoves tend to be finicky, need to be very hot to work properly and are more prone to leaking smoke into the house.  Most consumers should not consider them unless they know what they are getting into and are prepared to be much more engaged with their stove.  The same can be said about catalytic stoves.  Consumers should understand that they need to know how to use the second lever that engages the by-pass damper and occasionally check the catalyst, and replace it when it needs replacing.

Stove change out programs, that switch out old stoves with new, EPA certified models may want to exclude downdraft stoves from eligible replacements as they may be the hardest class of stove to run consistently without visible smoke.

The downdraft stove became popular in the 1980s when Vermont Castings used it to extract more heat from a stove and to help pass the emission testing required by the state of Oregon, and later by the EPA.  The by-pass damper helped slow down the fire, create turbulence, and extract more heat from the hot gases before they went up the stack. The Resolute Acclaim, one of the most popular wood stoves of the last century, was a downdraft stove.  It clocked in at 3.4 grams per hour and continued selling through the 2000s, but has since been taken out of production.

The Harman TL300 is a downdrafter but now discontinued and Vermont Castings may have discontinued theirs.  The Lopi Leyden and the Avalon Arbor (same stove) went off the market in 2012. There may be better designs of downdraft stoves that are easier to operate in other countries.

Downdraft stoves have existed for centuries in various designs. The original stove invented by Ben Franklin also had a downdraft incorporated into the design, and it is one of the reasons that the stove was so finicky and disfavored by the majority of consumers. Franklin himself admitted that the stove was difficult to operate and took lots of attention and wasn’t something that “could be left to the servants.”  Later iterations of the Franklin stove added a door and most got rid of the downdraft.

Hearth.com is a premier chat room for wood stove experts and rookies alike. It contains a lot of good feedback on downdraft stoves:

- “The creosote smell when closing the bypass is not an uncommon issue with the downdrafting stoves. I've seen Harman stove owners complain with it as well. I will sometimes get it. Sometimes not. It's not noxious, just a faint odor that I can do without. CO monitor pays it no mind.”

- “I wish a group of downdrafters could get their heads together on this one and figure out what is going on. It's a common problem to different stoves. Maybe that box full of smoke is letting some escape at the joints.”

- “I've smelled it when the draft was strong, but typically it comes when the flue has begun to cool down a little. Loading lid was a prime suspect, but I regasketed it and sat a cast iron pot on there.”

- “Downdraft stoves are notoriously fussy and demanding of a strong draft.”

- “The Leyden has undergone a few changes of the years. There are some ports that need thorough cleaning "Monthly" as well and they are not easy to reach. Make sure these ports are cleaned regularly. Your manual shows how to do this correctly.”

- “These stoves have to be seriously hot to work.”

- “I sometimes get a bit of smoke when loading. Mostly because I'm too lazy to do it right. Again, operate the stove as designed and if it doesn't work, get a look at the flue, check for ash buildup, etc.. ... your flue design is gonna be a tough one.”

- “Is the wood very well seasoned? That is very important with this stove as is a good draft.”

- “I would try running your stove top temperature a little higher (650-700) before you go to secondary burn, typically you get some drop in stovetop temperature when you close the damper.”

- “The Lopi Leyden is a very problematic stove. You don't want it, believe me!”

- “I also suggest to take off the Vermont Castings Resolute and Lopi Leyden. Both use a different mechanism to achieve a clean burn than the other non-catalytic stoves. Both stoves usually have a steeper learning curve, can be prone to costly repairs and are better suited for full-time burners which does not seem to be your intention.”

- “As others have mentioned, the Oakwood (and other downdrafts like Lopi Leyden and certain Vermont Castings models) can be a bit fussy about dry wood and good draft, requires a bit more babysitting and longer learning curve, and is not well suited to slower/lower burns in months like November and April.”

- “You want a stove with tubes in the top or a catalyst. Avoid stoves that draw smoke down into the back of the stove. For example: Vermont Castings, some Harman's and Lopi Leyden.”