Today the Alliance for Green Heat announced the public launch of a Next Generation Wood Stove Design Challenge that seeks to promote innovation in wood stoves.

The Challenge will culminate in a Wood Stove Decathlon, modeled after the Solar Decathlon, which will take place on the National Mall in Washington DC in November 2013. Eminent stove, technology, air quality and combustion experts will judge this public exhibition of next generation wood stove designs. Stoves will be judged on emissions, efficiency, affordability, innovation and ease of use.

The Design Challenge grew from discussions between the Alliance for Green Heat and editors at Popular Mechanics magazine who believe innovation can overcome some of the problems inherent in the wood stove and that a “smart” wood stove may be on the horizon.

Modern wood stoves can burn relatively cleanly, but they can be smoky and inefficient when not used properly. “Wood stoves are a lifeline for millions of mostly rural low and middle-income families, but they are too easy to misuse by operators,” said John Ackerly, President of the Alliance for Green Heat, the independent non-profit organization sponsoring the Design Challenge.

According to the U.S. Department of Energy, wood stoves produce 80% of residential renewable energy in America, while solar and geothermal combined produce 20%. The U.S. government funnels hundreds of millions of dollars into R&D and incentives for solar, biofuels and other technologies, yet the renewable energy device used by most Americans has been neglected.

“The wood stove is a vital part of our nation’s technological legacy, and we think it can be a vital part of our future,” said James Meigs, Editor-in-Chief of Popular Mechanics magazine. “We are excited to see what sort of innovation engineers, inventors and university teams can bring to the table to make the wood stove cleaner, and possibly re-invent its consumer image,” he continued.

Federal standards for wood stove emissions will be somewhat stricter by 2014, but will do little to impact how consumers use and misuse stoves. The two biggest problems with wood stoves happen when operators use unseasoned wood or do not give the stoves enough air, which leads to incomplete combustion. “We expect the Design Challenge to produce stoves that integrate electronics that are ubiquitous in today’s appliances and can include novel features that consumers want,” Ackerly said. “A smart wood stove may motivate people to trade in their older polluting stove and replace it with an higher efficiency, higher tech model,” Ackerly said.

A powerful and growing array of partner organizations that are helping with the Challenge include Popular Mechanics, the State of Washington Department of Ecology, the New York State Energy Research & Development Authority (NYSERDA) and the Global Alliance for Clean Cookstoves. The Design Challenge will also bring together engineers working on developing clean cookstoves in the developing world with those working on heat stoves in the developed world on the common goal of increasing efficiency and reducing emissions.

The deadline for initial applications is December 20 and the finalists will bring their stoves to Washington for the Decathlon in November 2013. The winning design will receive $25,000 and coverage in Popular Mechanics magazine. Second prizes will share a $10,000 award. For rules and more information about the Wood Stove Design Challenge, go to www.forgreenheat.org/stovedesign.

The Alliance for Green Heat promotes wood and pellet heat as a low-carbon, sustainable and affordable energy solution. The Alliance works to advance cleaner and more efficient wood heating appliances, particularly for low and middle-income families.  The Alliance is a 510c3 non-profit organization based in Maryland.

Posted by John Ackerly at 6:26 PM No comments:

Taking that 10% tax credit for a high efficiency wood stove you bought last year?  If you use tax software, it can be difficult.  TurboTax and Tax Act don’t mention wood stoves, and you have to learn from another site that you need to put it under “energy efficiency building property.”  H&R Block is the worst; providing no obvious place to enter “energy efficient building property” and telling users they are not entitled to a credit.

2015 update: Turbo Tax still does not list qualified biomass burning stoves in its main list of equipment eligible for the tax credit, but a later page does, if you know to click on "energy efficient building property.

Here is the experience of a New York Times reporter who bought a wood stove last year and tried all three tax soft ware packages:

"We’d bought a high-efficiency wood stove, which entitled us to the tax credit. TurboTax didn’t seem to mention wood stoves anywhere. All sorts of energy-efficiency improvements, including better windows and solar electric panels, qualify for credits. I found entry blanks and explanations for each but nothing for stoves. At the IRS.gov site, I learned that a wood stove should be entered in the category of “energy efficient building property” and that the agency considered it a biomass-burning device. Thus schooled, I entered it and received the $300 credit in both TurboTax and TaxAct. But Block stymied me. It provided no obvious place to enter “energy efficient building property” via its interview and told me that we were entitled to no credit."

The full NYT story has more comparisons of the three tax softwares, but nothing more about biomass heaters.
Posted by Melissa Bollman at 8:25 AM No comments:

Best Practices for Stove Change Out Programs (and Why Programs Underperform)

This story has been expanded and updated
and can be found here.
Posted by Melissa Bollman at 6:04 AM 2 comments:

Jon, a graduate of MIT, has been highly motivated by the opportunity of switching to a low-carbon, low-priced alternative to oil and propane. Jon is also a founding member of the Alliance for Green Heat and has supported our work that focuses heavily on assisting low and middle-income families to affordably heat their homes with cord wood and pellets. Jon continues to serve on the Alliance Board and one of his longtime interests has been to find ways for federal low-income heating assistance (LIHEAP) to help move families to lower cost, renewable heat. Jon has fought to bring European models of heating policy to America, which favor using biomass for their highest efficiency uses.

"Building Woodpellets.com over the past five years has been an honor and a thrill. I'm looking forward to seeing WoodPellets.com continue to thrive. It's an exciting time for both this company and the industry, as so many people turn to wood pellets for a more cost effective, greener heating fuel." Jon is charting his next move and when we called a few days ago, he was in his basement admiring his newest toy: a Harman pellet boiler that he outfitted with an automatic pellet feed system.
Posted by Melissa Bollman at 5:49 AM No comments:

The Next Generation Wood Stove Design Challenge will be launched later this month and run through the fall of 2013.  We have been building an impressive list of partners to support it, lawyers to make sure we have dotted our “i”s and crossed our “t”s, and, maybe most importantly, reaching out to dozens of university engineering departments and stove manufactures.

Could a wood stove be as efficient as a natural gas furnace?  Could it be as consistently clean as the cleanest pellet stove?  What “smart” features would consumers want in a next generation stove?  What information could a stove provide in a digital screen that would motivate or help the operator burn more efficiently?  Could your stove ever tell you the moisture content of your wood?  Could it tell you when you need to clean your chimney?  Could it power your phone and lights in a blackout?  Is there a market for a wood stove that ties into a solar thermal system? Would any of these features – or others – motivate people to trade in older stoves and buy cleaner, modern ones?

These are just a few of a long list of questions that we and others have been asking for years.  We hope this Challenge will begin to provide some answers and awaken consumers to the possibility that a new generation of clean burning stoves may be on the horizon.

We want to thank everyone who has provided input into designing the Challenge so far.  If you have input, please feel free to contact us at info@forgreenheat.org.
Posted by Melissa Bollman at 10:22 AM 1 comment:

A Plan to Advance Thermal Biomass in Maryland

The Maryland Wood Energy Coalition, organized in April, 2010 and composed of university, state agencies, private representatives and nonprofit representatives – including the Alliance for Green Heat, recently released a report for Maryland Policy Decision Makers and Citizens titled A Prospectus For Advancing Biomass Thermal Energy In Maryland.

The 20-page prospectus provides research‐based information and policy recommendations to increase the adoption of advanced wood energy technology in Maryland. Officials from the Maryland Energy Administration and the Maryland Department of Natural Resources were among the key authors.

The Alliance was also very involved in the preparation of the report and drafted sections that addressed residential wood and pellet heating. The effort was informally chaired by the University of Maryland Extension Service.

The Coalition found there is great potential for residential scale technologies in the state, finding that over 7 billion BTUs of thermal energy are available from sustainably harvested biomass and could offset significant amount of propane, oil and electric heat.

The Coalition recommends the following to support residential scale thermal biomass:
Additional insights on the energy savings of residential wood heat can be found on pages 12 and 13 the report.
Posted by Melissa Bollman at 12:11 PM No comments: 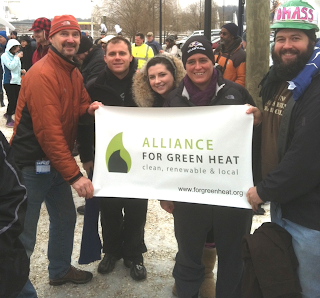 Supporters of wood, pellet and corn heating plunged into the Potomac River on January 14th during a light snowfall to raise money for a group that fights global warming. Pictured here (right to left), Sat Jiwan Ilke-Khalsa, head of the Takoma Park Corn Heating Co-op and an Alliance Advisory Board member, Delegate Heather Mizeur, who introduced a bill to incentivize residential biomass heat, Jeremy Crandall and Moira Moynihan, two of Heather’s brave and loyal staff, and John Ackerly, head of the Alliance for Green Heat.

Team Biomass raised more than $1,500 for the Chesapeake Climate Action Network, a group that fights for renewable energy, including thermal biomass.  Not pictured is Team Biomass’s bravest member: an 8 year-old girl who also dove into the river and is already becoming a wood heat activist.

Others who took the plunge included Congressional Representative Donna Edwards and noted NASA climate scientist James Hansen, one of the very first people who brought climate change to the attention of policymakers when he testified on Capitol Hill in 1988.
Posted by Melissa Bollman at 10:05 AM No comments: