In New Zealand, excess moisture is a major problem leading to mold and ill-health effects and the dry heat produced by pellet stoves was an excellent remedy.

One of New Zealand's leading researchers on inequality in health and housing, Philippa Howden-Chapman, pointed out that the lowest income families spend about 13 percent of their income on heating, while the wealthiest only about 2 percent. Around 1600 extra people die in winter than in summer due to poor housing and a lack of heating.

Lack of affordable housing and heating is not a new phenomenon.  Two thousand years ago a pregnant woman and her carpenter husband could not find adequate or affordable lodging, and the woman had to give birth in a manger.

For the full story:
http://www.stuff.co.nz/nelson-mail/opinion/columnists/teresa-o-connor/6173976/Stressmas-rams-home-key-themes

Posted by Melissa Bollman at 10:49 AM No comments: 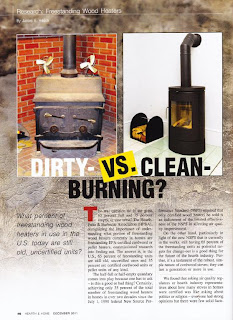 Ever wondered how many of the approximately 10 million wood stoves in the field today are clean-burning? According to a new article written by James E. Houck and published in Hearth & Home magazine, 35% of free-standing cord wood and pellet stoves are EPA-certified. The estimate is based on manufacturing records supplied by HPBA and the American Housing Survey, and does not include fireplace inserts.

Finding accurate data on certified vs. uncertified stoves was no easy task, Houck writes, because many home occupants don’t know the status of their heaters. To make matters worse, many states in the South and Mid-Atlantic region have few regulations or programs to encourage the purchase of new lower-emitting wood stoves. Oregon remains the only state that requires uncertified stoves to be removed when a home is a sold. It seems much more must be done before the reality of wood heat catches up to the precedent set by the New Source Performance Standard, passed over two decades ago.
Posted by Melissa Bollman at 1:54 PM No comments:

How to Choose a Wood Stove

How to Choose the Right Woodstove
Deciding which woodstove to buy can be tough, even if you've been heating with wood for years and are simply looking for a replacement stove. John Gulland, writing for Mother Earth News, brings a fresh, important and independent perspective to the subject.  (The editors even made him name certain manufacturers.) He stresses focusing on a good hearth store first, where you can get good advice and service, and then focus on a brand.  Many consumers buy based on aesthetics, but first look at how long company has been in business, Gulland says.
Posted by John Ackerly at 10:45 AM No comments:

Winter Fuels Outlook includes wood for first time
For the first time, wood and pellets are included in the annual Winter Fuels Outlook produced by the Congressional Research Service (CRS). The Alliance worked with CRS, the offices of Senator Shaheen and Congressman Van Hollen and others to ensure that wood and pellets are recognized as an important winter fuel.  The CRS report summarizes a more detailed report from the Energy Information Agency, which has still not included wood and pellets.
Posted by John Ackerly at 10:40 AM No comments:

Senators Propose New Tax Credit up to $5,000
Senators Snowe, Bingaman and Feinstein introduced the "Cut Energy Bills at Home Act" which would give up to a $5,000 tax credit for performance-based home improvements.  The bill, as written, makes biomass heaters eligible if savings can be calculated with approved energy efficiency software packages, such as RESNET, BPI or an alternative software. The Alliance for Green Heat is working with Congressional offices and efficiency standards organizations to ensure that there will not be unforseen barriers for biomass heaters. Currently, most energy efficiency software does not have sufficient ability to analyze performance and savings of biomass heaters.
Posted by John Ackerly at 10:37 AM 2 comments: