Coal Heating in the United States

By John Ackerly & Melissa Bollman
Alliance for Green Heat
This paper was prepared for the Warsaw Stove Summit which brought AGH and scores of experts in coal and wood heating from 19 countries to Poland in May 2017.

Summary
The US Census Bureau estimates that approximately 127,000 households used coal as a primary heating fuel in 2015, or about 0.1% of American homes. Residential coal heating dropped rapidly until 2000 and since then has been relatively stable.

More than half of homes using coal heat are concentrated in Pennsylvania and New York, right where it is mined. It appears to be based on cultural traditions and local support for local jobs because its still a very inexpensive way to heat and easy to transport. Most of the United States has no restrictions on coal heating and there have been few attempts to restrict it. Rather, it seems to have gradually died out except in pockets of states where anthracite is mined. Bituminous and sub-bituminous coal is much more widely dispersed but it is used far less than anthracite.

Coal stoves, particularly those fueled with anthracite coal that principally comes form Pennsylvania, typically have less particular matter than wood or possibly even pellet stoves. However, their health impacts may be far worse, as coal often emits high levels of SO2 and oxides from nitrogen.  In addition, coal often has poisonous toxins such as flourine, arsenic, selenium, mercury and lead.  For more on health impacts of coal and wood heating in the US and Europe, we excerpted key parts of a World Health Organization report here.


Who heats with coal and why?

Homes that heat with coal tend to be concentrated near anthracite coal mines and in homes with lower or mid level incomes. In the wealthier and more urban counties of Pennsylvania that are within 100 miles of anthracite mines, virtually no households heat with coal. High use of coal heat does not correlate with high use of wood heat. Both coal and wood are favored by rural, lower-income populations but coal appears to be favored near anthracite mines, and wood is favored in nearby, rural counties, according to data from the US census. The highest percentage of homes heating with coal at the county level is about 13%. 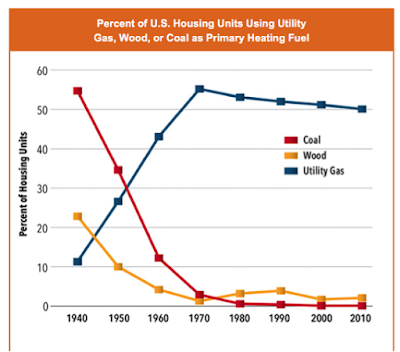 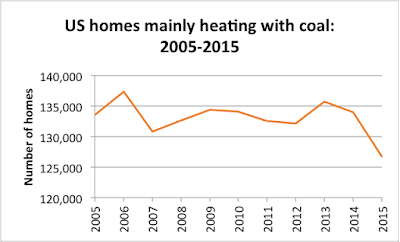 A prominent 2008 New York Times article reported that residential coal heating was on the rise, but rise was modest, and petered out a few years later. That rise corresponded with a major recession from 2007 – 2009 during which rates of wood heat soared far higher than coal. The New York Times also reported that an additional 80,000 homes use coal as a secondary heat source and the US Census reported 104,000 used it as a secondary heat source in 2005. Only 4,000 homes use it to cook with and 22,000 used it to heat domestic hot water in 2005, according to the US Census. 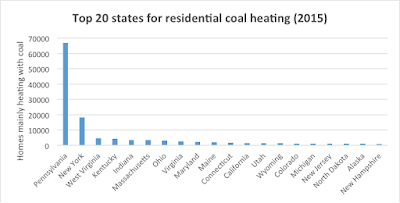 In 2015, the top five states for residential coal heating were Pennsylvania, New York, West Virginia, Kentucky, and Indiana. Over 50% of US homes that heat primarily with coal are located in Pennsylvania, where anthracite coal is mined.

The primary benefits of heating with coal, compared to wood, is 1. it burns for longer periods of time, so less reloading is needed and a home can easily stay warm overnight; 2. Like pellets, it can be delivered in bags on pallets by a forklift, and does not need the time consuming splitting, stacking and seasoning that cordwood needs; 3. It is even more inexpensive per BTU (assuming you don’t cut the wood yourself); and 4. It is a very dense fuel, and takes up half the space that the same amount of wood takes, per BTU.

The downside of heating with coal is 1. The odor, which most people find moderately unpleasant; 2. The black dust which is harder to clean than dirt and wood pieces from cordwood; and 3. Its hard to light, requiring most people to start the fire with wood, before switching to coal.

While the above pros and cons are widely agreed upon, other less tangible factors play a role. Coal has increasingly gained a stigma as a dirty, non-renewable fuel, whereas wood is regarded as far more environmentally friendly (even though particulate matter from wood can be equally high). On the other hand, the dwindling economic prospects of coal towns and counties tends to make those populations want to support the fuel to combat what they often see as an unfair bias against coal.

Coal stoves are either stokers or batch. Stokers automatically feed coal pellets (much like pellet stoves) into the stove, require electricity and only use anthracite. Batch stoves are loaded by hand and can take anthracite or bituminous.

Most coal used for heating in the US is anthracite but anecdotal estimates by experts say that no more than 25% is bituminous, primarily in areas where its abundant. 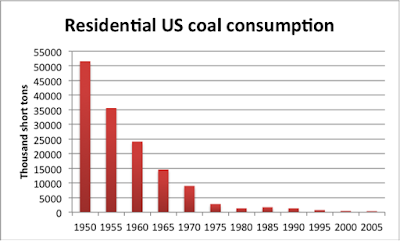 The EIA stopped collecting data on residential coal consumption in 2008. In 2007, the EIA reported that US residents consumed 353,000 short tons (320,171 metric tons) of coal, which represented only 0.03% of the nation’s annual coal use (1.1 billion short tons or around 1 billion metric tons). The overwhelming majority of course (93%) of US coal is used to generate electricity.

Usually coal is sold in 40 or 50 pound bags or by the ton. Coal may be sold directly to consumers from the mine, a fuel supplier, or a hardware store. Blaschak is one of the largest suppliers of bagged anthracite coal and sold 374,000 tons in 2014. Forty pound bags of anthracite coal (any size) from Pennsylvania usually run $6-$8. A ton of anthracite typically costs between $190 and $210 per ton, before delivery charges (which can increase price to $250-$300). One fuel seller, Central Maine Coal, sells about 200 short tons (181 metric tons) of residential coal per heating season.

Bituminous coal is usually considered a better coal for blacksmithing than heating, but can be burned in some coal stoves and is often only $80-$100 per ton. 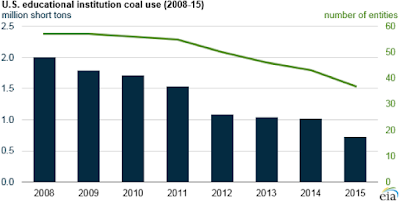 Most coal stoves are made in Pennsylvania except for one big producer, Hitzer stoves located in eastern Indiana. Sales of coal stoves are reported to average 4,000 to 7,000 a year, but in 2008 they may have topped 10,000. In comparison, about 140,000 wood stoves are sold each year. There are about a dozen companies making coal stoves and one notable trend is that the larger wood stove companies are getting out of the coal stove business. Vermont Castings, Harman and Moreso used to sell coal stoves and now don’t. The one company that still focuses on both fuels is US Stove Company, based in Tennessee. Coal stoves cost about the same as wood stoves and range between $2,000 - $3,500.

Coal stoves remain exempt from EPA emission regulations. Coal stoves have never had a certification program at the EPA or at any state level, although the federal government and some states have indicated an interest in developing emission regulations. Regulation would likely drive up the cost of coal stoves and may reduce sales of coal stoves but other strategies may reduce their use faster and more economically. But without emission regulations, there is little data on coal stove emissions from various types of coal stoves, and there is little incentive for stove companies to try to produce cleaner stoves. Tests conducted in the 1980s suggested that wood stoves emitted higher levels of particulate matter than anthracite stoves, but lower levels than bituminous stoves (Houck, 2009). Of course, wood emits fewer other toxic chemicals than coal.

One significant policy change in 2015 was the ban on advertising dual coal/wood use in stoves unless the stove was certified with wood, and the company also tested for coal emissions and provided that data to the EPA. To our knowledge, no company has done this so no stove should advertise the ability to burn wood and coal any more.

The EPA is currently funding research on coal emissions and has developed an unofficial, draft test method at Robert Ferguson’s lab. However, this is being undertaken only because of an EPA program to change out coal stoves on the Navajo Indian reservation, not because it has any apparent mandate or serious plan to start regulating coal stoves.

It is unlikely under the Trump administration that any certification program would be initiated by the EPA, and the only state with enough coal stoves to justify the effort would be Pennsylvania, which is unlikely to do so.

Restrictions of the use of coal stoves

Unlike the United Kingdom, there has never been any national effort in the US to reduce reliance on coal stoves. Krakow, a major Polish city is banning coal stoves in 2019, after a multi-year effort to provide subsidies for alternative heating sources.

Two states – Washington and Oregon – effectively ban them because they only allow stoves that meet specific emission requirements, but those states would have very little coal heating anyway.

Many air districts that have poor air quality and high particulate matter levels employ temporary burn bans apply to coal stoves and well as wood stoves. A few jurisdictions, such as Fairbanks, Alaska, offer homeowners financial incentives to recycle their solid fuel burning appliance (including coal stoves) or replace it with a less polluting appliance (coal stoves are not eligible). However, most change out programs only remove old wood stoves and do not allow coal stoves to be replaced with wood stoves. A Pennsylvania county offered $200 to trade in old wood or coal stoves, but that program has been suspended.

Oregon is the only state where it is illegal to sell a coal stove, or any other uncertified solid fuel burning appliance. Oregon also requires uncertified solid fuel burning appliances, including coal stoves, to be removed and destroyed when a home is sold. According to the latest (2015) Census data, only 143 homes rely on coal for primary heat in Oregon.

At the local level, there may be a number of cities or counties that do not allow coal stoves, but the only one we could find is Summit County, Colorado that forbids the installation of a coal stove (uncertified solid fuel burning device) in a new home or as a replacement unit for an existing non-certified stove.