America's oldest heating source - firewood - is experiencing a comeback, with wood heat soaring 50% - 80% in the last decade in some states, but only a handful of states are prepared to leverage American's newfound enthusiasm for wood heat.

A report released today, the "Residential Wood Heat Report Card," by the Alliance for Green Heat, finds that most states do little to promote and manage what is often the second or third most popular heating fuel in hundreds of rural counties around the US. 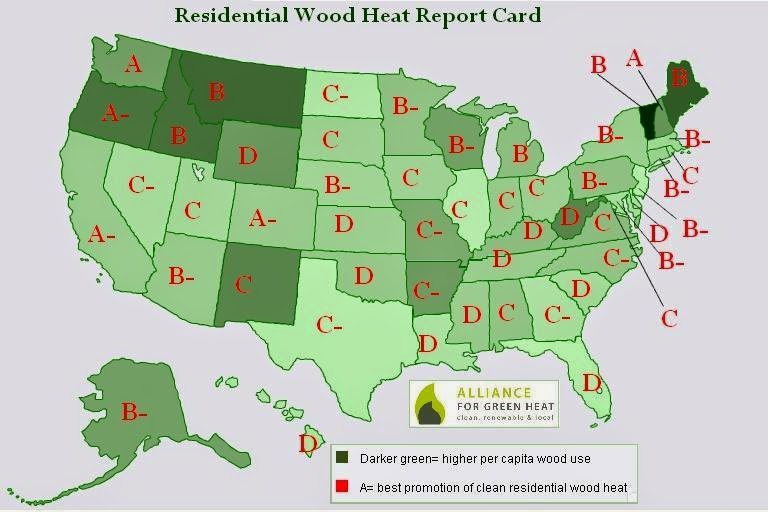 "Wood heat is overwhelmingly America's most common form of residential renewable energy, but states are just beginning to tap into its potential to drastically lower fossil fuel use while managing emissions," said John Ackerly, President of the Alliance for Green Heat.

"Already, homes with wood and pellet stoves displace about 17 times more fossil fuel than homes that have solar panels.  The states that tap into this potential of clean wood heat can create thousands of jobs, improve energy security and keep tens of millions of heat dollars in their own state," Ackerly noted.

According to the US census, about a quarter million more Americans are heating primarily with wood than in 2000.  In six states, Connecticut, Massachusetts, Michigan, New Jersey, Ohio and Wisconsin, the number of Americans heating with wood rose between 50 - 80%.

The Alliance graded each state on six categories, including policies that help reduce wood smoke, promote the cleanest appliances and restrict the most polluting ones, and provide educational information on best wood heat practices.

The states that got the top grades, such as California, Colorado, New Hampshire, Oregon and Washington are states that are often at the forefront of developing renewable energy, but are not necessarily the states with the highest per capita wood heat use.

The top-scoring states were the ones who: 1. Restricted installations of more polluting wood appliances not certified by the EPA, 2. Provided Energy Star-like incentives for residents to buy the cleanest stoves, and 3. Provided extensive educational information on clean burning practices.

The report identifies a growing array of creative and cost-effective ways to leverage the use of a renewable energy while mitigating emissions.  For example:

The Report Card sheds new light on a very old form of renewable energy that is still used by millions of Americans.  The EPA estimates there are about 12 million wood stoves compared to only 300,000 solar photovoltaic systems in homes in the US.  "This country can achieve renewable energy and energy independence goals significantly faster and cheaper by deploying modern thermal biomass systems," said Mr. Ackerly.