Part of the Workshop rules was a requirement that teams had to publicly share their test results, which is a key part of the collaborative and educational process. During the Workshop, each team presented their test data to the 50 attendees who had the opportunity to discuss the results and give feedback to the  team.  Unlike EPA test, which starts when the stove is already hot, we used a warm start, capturing some start-up emissions, we used cordwood instead of crib wood and we used higher moisture content wood. Note: any gram per hour (g/h) references in the below test results are not comparable to g/h values from EPA test labs because we did not follow the Method 28 test protocol.

Team Presentations about their Stoves
Each team presented the concepts and technologies in the stoves. For a brief technical overview of all the stoves with contact info for the Teams, click here.

Expert Presentations
During the Workshop, there were a series of expert presentations and webinars about automation, traditional stove technology, public health implications, air quality, regulatory issues and other relevant topics.

Feedback Survey: Results of a 10 question feedback survey about the Workshop by teams, participants and organizers.

From the left to right - Ellen Burkhard from NYSERDA, Lisa Rector from NESCAUM, Amanda Aldridge from EPA and Mark Knaebe from US Forest Service.

We spent hours in this room, having different presentations every hour, with lots of discussion and debate. Here, Ben Myren is presenting the testing results of the VcV stove. 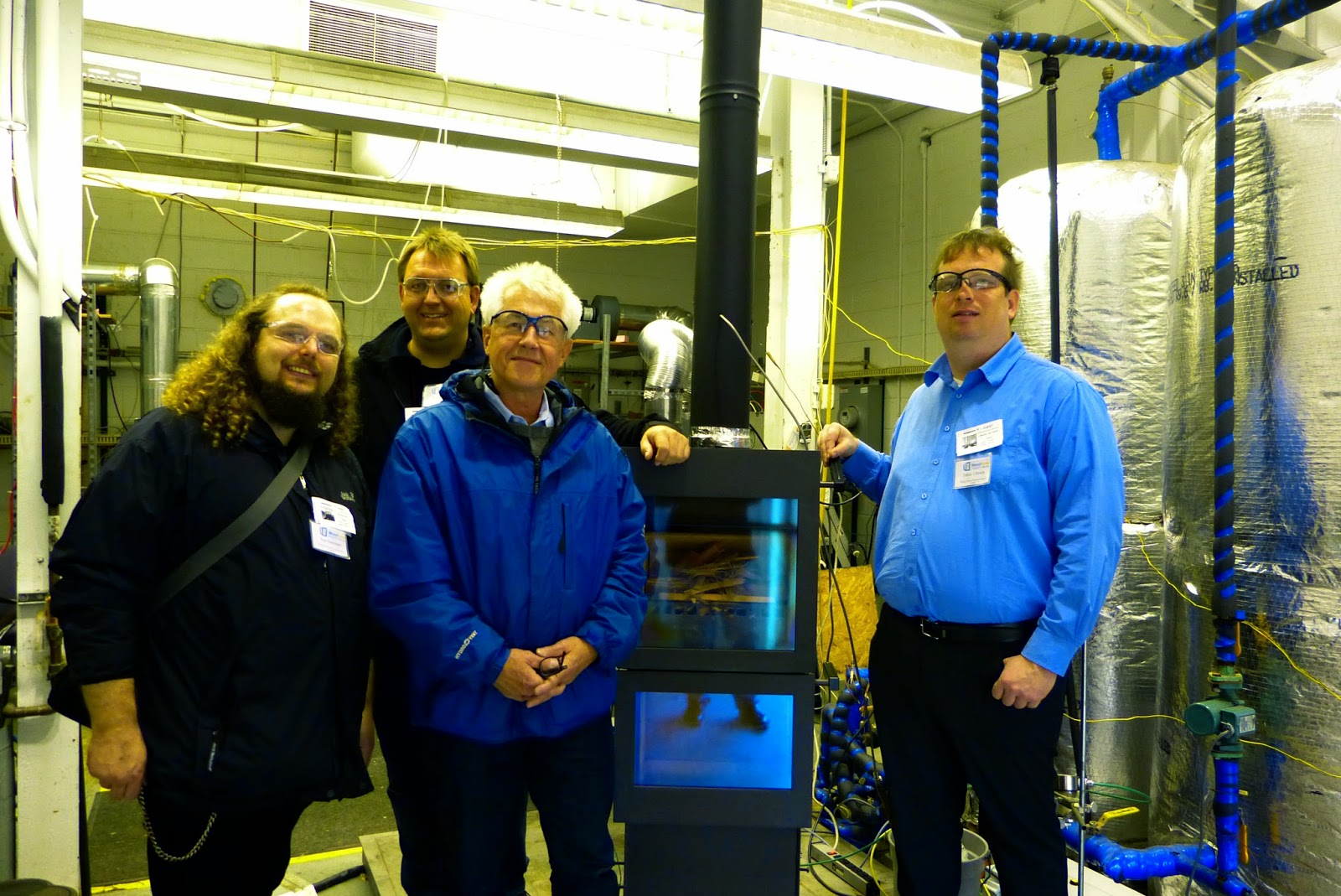 Gregory Elliiot and Peter Cullen from Wohler, and John Pilger from Chimney Safety Institute of America. 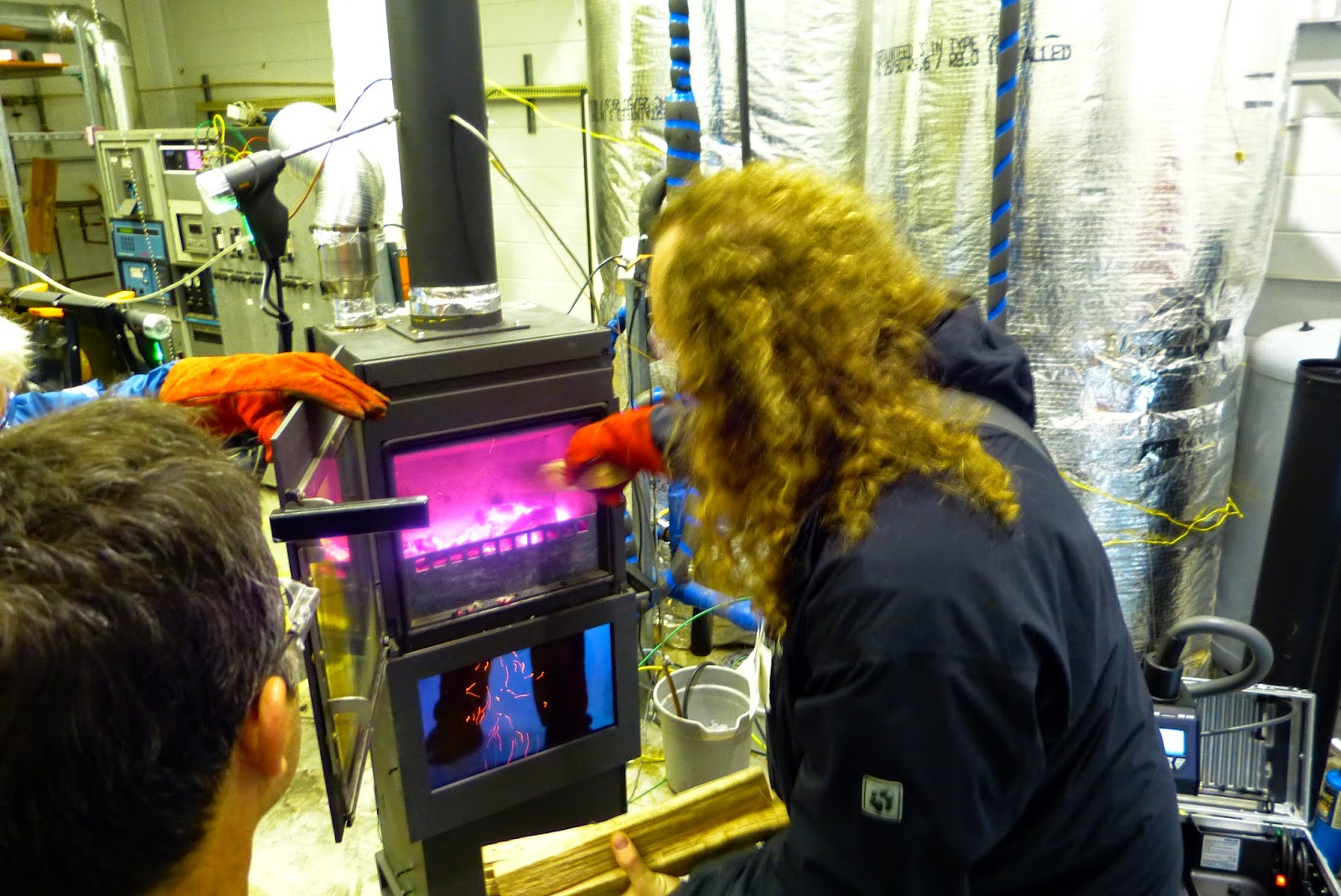 The Catalus Ventus shows incredible hot catalyst temps compared to the both the stack and the firebox. This was during start up, when it was emitting maximum smoke, but between the catalyst, the fabric filter, virtually no smoke came out the stack.

Ivana Sirovica, a Research Fellow from Alliance for Green Heat, and Ben Myren, as Ben finished the final test of the week.

Tom Butcher using the Wohler particulate analyzer on the VcV stove. Because we used wood that was often above 25% moisture content, we had to deal with more moisture in our testing instruments.

Underneath the VcV stove is where the magic happens, and mechanical valves automatically close or open the primary or secondary air, depending on what the stove needs to maintain a clean and efficient burn. THis stove maintained a steady low burn rate with beautiful swirling flames in the upper part of the chamber.

Ben Myren shows how his thermocouples could read the temperature in 10 spots of the stove at all times. The top of the flue could be 250, when the air entering the catalyst was nearly 800, and 1300 in the firebox.

Brian Gauld, the owner of the VcV travelled from New Zealand, where there is also demand for automation that can improve stove performance far more than stoves are likely to perform when operated manually.

Our cord wood was kiln dried and then shrink wrapped so it would maintain a constant moisture content. The wood was far wetter, on average, than wood used in EPA test certifications, which helped us assess how these automated stoves could perform with higher moisture content wood.

Preparation of kindling for the tests.

George Wei and Yussef were two of Brookhavens talented technicians. Both have worked on improving oil combustion systems, outdoor wood boilers and stoves.

The last stove is taken out, and demonstrates the challenge of testing the same day as removing stoves that are still hot!