The Maryland Energy Administration (MEA) announced that it extended the rebate program for wood and pellet stoves indefinitely, and raised the rebates amounts to $500 for wood stoves and $700 for pellet stoves. 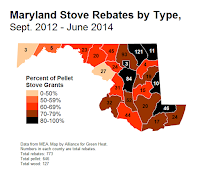 Initial data from the program showed that Marylanders used the rebates for pellet stoves twice as often  Pellet stoves are usually used as a primary or sole heat source of an average sized home, and typically save consumers $400 to $800 each year in heating costs.
as for wood stoves, defying national trends.

The program provides rebates to Marylanders who heat their home with oil, propane or electricity, which accounts for about half the state’s population and almost all of the rural population. Homes that heat with natural gas, usually in urban and suburban areas, are not eligible.

“We want to thank the Director of the MEA, Abby Hopper and her staff for helping rural Marylanders use an affordable renewable energy and keep their energy dollars local,” said John Ackerly, President of the Alliance for Green Heat.


In a press release from the MEA on Sept. 16, 2013, MEA said, "Third party analysis of the program found that the most grants on a per capita basis have gone to rural counties that have been hit hardest by the economic recession. This grant further improves the already impressive economics of wood stove systems and provides incentives for the cleanest stoves on the market."

The average cost for buying and installing a stove in Maryland is about $4,000. Although, according to MEA data, some project costs were under $3,000. For an average $4,000 project, the wood stove rebate of $500 covers 12% of the costs and the $700 rebate for a pellet stove covers 17% of the cost. A $300 federal tax credit that ends on December 31 of 2013 provides an additional incentive this year.

Extending the program indefinitely gives the wood and pellet stove grant program parity with the residential solar and geothermal programs.  Advocates, including the Alliance for Green Heat, had argued that ordinary rural Marylanders were being left out of a program that was mainly benefiting wealthy urban and suburban families.

Eligible stoves must meet emissions requirements than are significantly stricter than the EPA’s. Homeowners are not required to turn in an existing, uncertified stove. However, about half the families that had older, uncertified stoves recycled them, according to data collected by MEA.

The push to add wood and pellet stoves in Maryland’s residential renewable energy grant program was championed by Delegate Heather Mizeur of District 20 and a host of other Delegates.  The Alliance for Green Heat organized a coalition of environmental and renewable energy groups and small businesses. The MEA voluntarily began the funding using existing resources in September 2012.

For information about how to apply for the rebate, click here.
http://energy.maryland.gov/residential/Pages/incentives/woodstoves.aspx

For common Questions & Answers about the program, click here. http://www.forgreenheat.org/consumer_resources/mdrpqa.html#B
Posted by Anonymous at 11:24 AM