Efficiency standards will benefit both consumers and industry

Alliance for Green Heat, October 29, 2012 - Efficiency standards being proposed by Minimum Energy Performance Standards (MEPS) are requirements placing limits on the energy consumption of appliances and equipment, and they have become benchmark standards for a range of appliances and devices, including office equipment, heat pumps, and air conditioning equipment.


MEPS have stimulated the economy by saving consumers and businesses billions of dollars in utility costs, money they can now spend in other areas. The Department of Energy estimates that efficiency standards have saved an average of $15 billion a year, a figure expected to double by 2025. And federal investments in these standards are paying off: every federal dollar has net an average of $650 in energy savings.

Efficiency standards for wood and pellet stoves and boilers are a good investment. A large portion of the savings in the residential sector come from efficient space-heating equipment, as space heating accounts for 30% of US energy bills and is often the greatest expense for low-income families. Efficiency standards for gas furnaces are estimated to save 46 trillion BTUs of natural gas annually by 2020 and 108 trillion BTUs annually in 2010, enough to heat more than 2 million homes for a year. Similar regulations for wood stoves would reduce our nation’s wood and pellet consumption and give homeowners extra capital to put back into the economy.

Standards in the wood and pellet industry are direly needed. Currently wood and pellet stove efficiencies range from the mid-80s to as low as the 30s for new stoves, based on high heating values (HHV). Pellet stoves, which are widely believed to be more efficient than wood stoves, are often less efficient because of excess air to keep the glass clean. Low-efficiency stoves consume excessive amounts of wood, increasing the running cost and wasting natural resources. Stoves that are low efficiency due to incomplete combustion also release higher amounts of noxious gases and particulates, pollutants that pose health risks to households and their surrounding communities.

Some opponents of efficiency standards make the case that mandatory standards are unnecessary and if left unregulated, consumer demand for more efficient products will naturally drive manufacturing of increasingly more efficient technology.

However the lack of standards may actually limit the ability of demand to drive advancement in the industry for all price points. Without MEPS, high-efficiency is often treated as a “special feature” by manufacturers, coupled with deluxe options on high-end stoves; these more expensive models may not be regularly in-stock and available to most consumers or in their price range. As suggested by one study[1], in an imperfect market manufacturers prefer this sequestration of high-efficiency products because it maximizes profits: they can charge high-income consumers more for appliances with this “special feature,” giving them as much efficiency as they are willing to pay for, while offering low-income consumers less efficiency than what they pay for. Furthermore, as customers take a number of features into account when purchasing an appliance (e.g. color, size, sticker price, and manufacturer) and because of the lack of variety in available and affordable high-efficiency models, many consumers are resigned to settle for mediocre models that will cost them much more in the long run.

It also should be considered that in many wood-heated households the residents have little choice in the stove installed in their homes. According to a 2009 survey by the U.S. Energy Information Administration (EIA), 1.7 million rented households in the U.S., a good number falling in the low-moderate income bracket, heat primarily with wood. Landlords are more likely to have low-efficiency equipment that is cheap upfront but saddles tenants with expensive energy bills each month.

There is concern that mandatory standards will significantly increase the purchase price of stoves, making them out of reach of the low-income communities that rely on them the most. However, this has not been proven. DOE efficiency standards for both refrigerators and central air conditioners did not lead to any significant price increase, as some had feared. 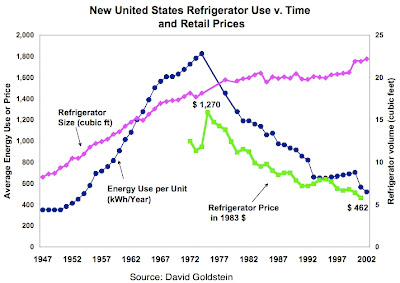 MEPS are gaining traction in developing countries that have larger low-income populations that can benefit from lower fuel costs. In Latin American, mandatory MEPS now exist Mexico, Brazil and Uruguay on a product-by-product basis. The growth of MEPS is expected to continue as more and more countries work to reduce energy use and reduce reliance on fossil fuels, and as MEPS become more widely recognized as a very cost effective measure.
AGH’s has previously published a blog article on this topic:  http://forgreenheat.blogspot.com/2012/08/the-efficiency-debate-required-or.html
[1] Fisher, Carolyn. “Who Pays for Energy Efficiency Standards?” Resources for the Future Discussion Paper 4-11. Feb. 2004.
Posted by Melissa Bollman at 1:14 PM