Alliance for Green Heat, January 7, 2013 - Each issue of Mother Earth News, a magazine that caters to 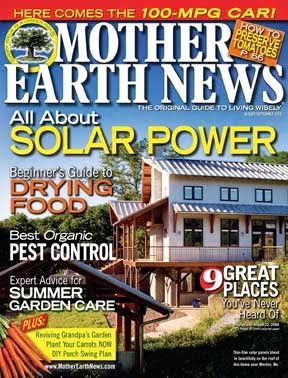 the granola, Birkenstock and organic vegetable crowd, also carries many ads from outdoor and indoor biomass boiler companies. Actually, we love the magazine, but it carries some very misleading advertisements about wood boilers and furnaces.

The Alliance for Green Heat has regularly put the spotlight on outlandish claims by various manufacturers. This month we feature Kuuma who is advertising "99.4% comb. efficiency" wood burning furnace.   The December/January issue of the magazine also has an half-page ad from Central Boiler stating that their E-Classic "requires up to 70% less wood than other wood-burning appliances."

Exaggerated efficiency claims have become almost commonplace in the boiler and stove industry, taking advantage of consumers who don't know that there is no commonly accepted way to advertise efficiency any more. One rule of thumb: Beware of any appliance claiming 99% efficiency. Any claim of efficiency in the upper 90s is likely combustion efficiency, not thermal efficiency - the amount of useful heat produced by the unit.  Combustion efficiency has no bearing on the useful heat a unit generates which is why stoves, boilers and furnaces manufacturers typically advertise thermal efficiency.  The most efficient wood stove, using EPA approved efficiency standard is 82%, and the most efficient boilers using that same standard are probably under 90%.

Even though Kuuma has been advertising "99.4% comb. efficiency," they deserve credit for posting their third party lab results on their website, which very few manufacturers do.  For consumers who want to read the fine print, which you should if you are going to buy a furnace, these reports are extremely helpful, if you know how to read them.

We at the Alliance for Green Heat applaud Mother Earth News for consistently good editorial coverage of wood heating, partially thanks to their contributing editor John Gulland, and we understand that they aren't responsible for claims made by advertisers. (We also love granola, organic vegetables, home-baked bread, etc. Birkenstock - not so much.)

Update: See the comments section below for a response from a Kuuma representative.  Kuuma has slightly changed their ad to say "combustion" instead of "comb." which consumers may think means combined efficiency.   We urge Kuuma to advertise their thermal efficiency like other manufacturers.  See here for a boiler company that advertised 97% efficiency at the end of a period when EPA had mistakenly endorsed overly high efficiency numbers for boilers.  They stopped using that ad.

Update: In March, 2014, the EPA updated verified efficiencies for outdoor boilers, and has been requesting boiler manufacturers to desist from using misleading information.
Posted by Melissa Bollman at 2:42 PM