The 2010 Woodstove EXPO: Where the Regulators meet the Industry

Wood stove manufacturers, EPA regulators, state air quality officials and potential stove buyers gathered under one roof in an annual ritual that provides a fascinating snapshot of the future of wood heat in the United States. The manufacturers included those who produce both the cleanest, next generation units, and the dirtier, last generation units that are about to be regulated out of existence.

State air quality officials had the opportunity to see the units in operation that they may accept or ban in their states. And the EPA, which brought a large contingent this year, was intensively seeking input from the industry about by what means and by how much it should tighten federally mandated air quality regulations.

The annual expo, hosted by the Home, Patio & Barbecue Association (HPBA) brought over 7,000 people to the Orlando convention center. HPBA arranged for scores of meetings between EPA officials and the caucuses that represent pellet stoves, pellet producers, wood stoves, outdoor wood boilers, masonry stoves, cook stoves, coal stoves and fireplaces. Many of these technologies, which have never been regulated before, are expected to have to meet EPA emissions standards several years from now. The most prominent representatives of EPA and industry - Gil Wood and John Crouch - both of whom have decades of experience with hearth products engaged in productive and sometimes heated exchanges throughout the conference. The Alliance for Green Heat extends our appreciation to both the EPA and to HPBA for allowing non-profits like us to attend and participate in many of these sessions.

One highlight of this annual trade show, which is hosted by Hearth & Home Magazine, are the Vesta Awards, honoring innovation and design in new products. The most recently added award is the Green Award, for hearth/patio/barbecue products which demonstrate green innovation in their manufacture, use, or disposal. This year’s Green Award went to an environmentally‐friendly fire grate for its revolutionary design and superior technology for reducing emissions in wood burning fireplaces by up to 72%. EPA official Gil Wood was asked to present this award and in accepting the award the company’s President, Lisa Leighton, said she “looks forward to working with air quality districts all over the country … [to improve] this precious American tradition” of wood heat. We've featured this grate as this month’s “Featured Product.”

In the pellet category, Thelin’s Tiburon stove took first place for its beautiful design. Thelin is located in Sacremento, CA and specializes in stoves that have an old-fashioned "Parlour, Pot Belly" look. The Tiburon is still in development and has not yet been third-party tested for emissions.

In our opinion, the most controversial award went to an outdoor wood boiler made by Central Boiler, instead of to the runner up, a masonry stove. The boiler, known as the E-Classic 2400, has an emissions rating of 3.3 grams per hour and 5.4 grams per hour on its highest test run, making it the cleanest burning outdoor boiler that burns wood (pellet boilers have generally lower emissions). (Note: A 3.3 gram per hour rating for an outdoor boiler is different from a 3.3 for a wood stove, because both the test method and the fuel protocol are different.) The E-Classic is a major step forward in both emissions and efficiency and holds real promise for what continues to be the most controversial class of wood burning products in the United States.

Our issue is not with the E-Classic 2400, but with the manufacturer, who we don’t believe has been the best corporate citizen in the industry. Central Boiler is the largest manufacturer of outdoor wood boilers in North America and is very active in fighting against state and county regulations that would help improve air quality. 75% of Central Boiler sales are still made up of unregulated outdoor wood boilers that are often incredibly polluting and may be in close proximity to neighboring homes. While this is still legal in about 43 states, it has contributed to giving our industry a bad name and undermines progress towards getting biomass accepted as a first tier renewable energy source. 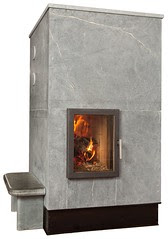 The runner up for that Vesta Award was the Helios masonry stove, a 13,000 Btu/hour heater that is both the cleanest and most efficient in its class. Rod Zander, who designed the Helios, is using advanced European designs but the unit is made by New England Heath and Soapstone. While the market for masonry stoves in America has been relatively small, tens of thousands are produced and installed in some European countries every year.
Posted by John Ackerly at 1:40 PM